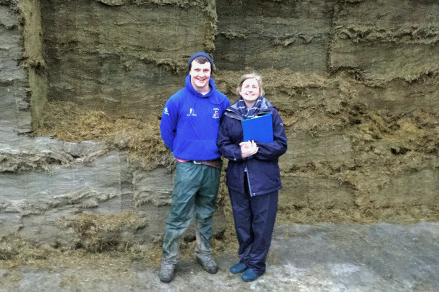 James Purcell from Dungiven YFC has been named the winner of the Young Farmers’ Clubs of Ulster 2017 silage making competition sponsored by John Thompson & Sons Limited.
The competition began in November with members from over 30 clubs throughout Northern Ireland taking part in regional heats. From this the highest scorer from each county made it through to the final.
In second place was Kyle Smith from Clanabogan YFC and third place was Peter Boyd from Straid YFC. The remaining finalists were John Porter from Annaclone & Magherally YFC, Andrew Boyes from Bleary YFC and Craig Cowan from Lisbellaw YFC.
The competitors were assessed by judges Mary Jane Robinson from John Thompson & Sons Limited and Rodger McCracken, dedicated member of Ballywalter YFC. The judges travelled to the farm of each finalist and carried out a visual inspection of the silage taking into account its fermentation, digestibility and dry matter content as well as the sealing of the silo and the way in which the effluent was collected. They also conducted an interview with each of the finalists in relation to how the silage was made and their current feeding policy.
YFCU would like to thank the judging panel for taking the time to make their expertise available to the Association. It would also like to extend a note of appreciation to John Thompson & Sons Limited for their continued support of this event.