Data released by Agrisearch indicates that during the period March to May 2020 grass growth across Northern Ireland was up to 28 per cent lower than would normally be expected for this period. 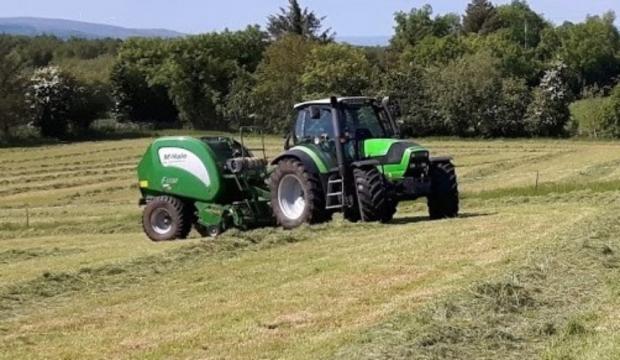 When making silage bales ensure they are stored at least 10 metres away from a waterway.

This was in part due to the prolonged dry period over these months. Although this allowed many farmers to make high dry matter first cut silage, it will have inevitably impacted on the quantity produced.

“Baled silage can be an excellent way to build up silage reserves, through the removal of excess grass supplies. However given the current wet weather, wilting may not always be possible leaving an increased pollution risk from bales produced. So, care must be taken when choosing a suitable location to store silage bales.

Silage effluent continues to be one of the most potent sources of pollution on farms and is 200 times more polluting than untreated sewage. On entering a waterway, it causes the oxygen to be rapidly removed from the water with devastating effects on animal and plant life.”

The regulations regarding silage and slurry storage are contained in Nutrient Action Programme (NAP) Regulations (Northern Ireland) 2019 which is available to view on the DAERA website. The NAP Regulations state that silage bales must be stored at least 10 meters away from a waterway and managed in such a way as to prevent seepage into a waterway.

Phelim Connolly continued: “There are several key points to take into consideration when storing hay bales.

“Where possible, grass should be wilted to at least 25 per cent dry matter before baling because this his will reduce the risk of effluent seepage. Also, silage bales must be stored at least 10 metres away from any waterway and managed in such a way as to prevent seepage into a waterway.

“When choosing a storage site, ensure it is level and carefully assess the potential polluting risk to a waterway. Field or yard piped drainage systems should also be considered as storing too close to these systems could allow any escaping effluent to enter a waterway directly.

“Also, if bales are stored on concrete, the effluent must be collected in the same way as effluent from a silage pit. And, if you’re storing on a hard core or stone base ensure the aggregate size is not too large as open spaces within it can accelerate movement of effluent seepage and enter groundwater systems quicker.

“In addition, if you’re storing bales in a field then try to place them close to a track or lane. This will help avoid excess rutting and compaction of land during winter months when it is more likely to be saturated.

“Finally, when it comes to using baled silage, remember it must not be opened within 10 mtres of a waterway – including field drains and sheughs. Also, care should be taken to ensure that the residual effluent contained in the removed wrap does not escape to a waterway.

“And, remember to dispose of bale wrap in accordance with the Waste Management Regulations. All waste plastics used on farm should be recycled as a preferred option. If recycling is not an available option it should be taken to a licensed landfill site for disposal.”